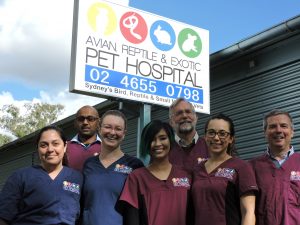 Birds, reptiles and exotic pets require committed and special care that differs from that required by more traditional domestic pets. AREPH handle the needs of these unique animals. We provide dedicated care, the latest equipment, the highest commitment of service and are owned by one of Australia’s most respected universities - The University of Sydney.

Our mission
To provide the highest quality care for our patients and courteous, compassionate and understanding service to their owners. 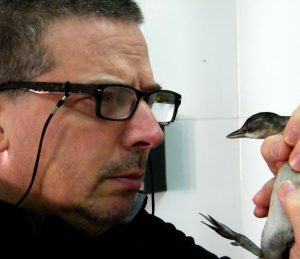 After graduating Lorenzo immediately started working with birds and traveled abroad to increase his skills and knowledge in avian medicine, and was the first Italian member of the Association of Avian Veterinarians.

After working as a practitioner for 10 year, at the beginning of 2000 he took the position of Veterinary Director at the Loro Parque, in Tenerife (Spain), the most diverse Parrot collection in the world, where he worked until mid-2005.

Since 2013 he is Accredited by the FNOVI (Italian Federation of Veterinary Colleges), in Avian and Zoological Medicine and Surgery and Zoo Health Management.

In 2015, he successfully sat the exam for the ESVPS General Practitioner Certification in Exotic Animal Practice and since 2010 he is lecturer at the University of Milan, on selected topics on Management and Welfare of Birds.

Lorenzo has been a panel member of the EFSA (European Food Safety Authority), and has been twice Chairman of the European Committee of the Association of Avian Veterinarian and the President of the Italian Society of Exotic Animal Veterinarians (SIVAE) and is still cooperating with national and international journals and has published several papers and book chapters.

Lorenzo’s main interests are related to bird conservation (he has been the official veterinarian of the Spix’s and Lear’s Macaws recovery programs), bird breeding and diseases related to avian fertility. 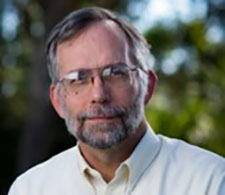 He taught zoo, exotic pet, and wildlife medicine to surgery in the class room and in the clinic to veterinary students from 1993 to 2006 when he joined the faculty of the University of Sydney as the Director of the Wildlife Health and Conservation Centre and the Avian Reptile and Exotic Pet Hospital. David teaches exotics and wildlife practice to the 3rd year Doctor of Veterinary Medicine (DVM) students, is the coordinator for the Masters of Wildlife Health and Population Management and contributes to students during their rotation through the Avian Reptile and Exotic Pet Hospital.

His research interests are varied and include infectious, toxicological and nutritional diseases of wildlife and exotic animals and wildlife ecology and conservation. He is an active member of the Association of Avian Veterinarians, is on the steering committee for the Koala Health Hub, and is a member of the Veterinary Reference Group for the critically endangered orange-bellied parrot.

He has over 100 publications in peer-reviewed journals and has spoken widely in Australia and around the world. 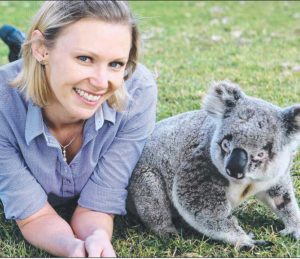 AREPH's Senior Veterinarian, Dr Bree Talbot, who is currently on maternity leave,  graduated from the University of Sydney in 2004 with a Bachelor of Agricultural Science (majoring in animal genetics) and then in 2010 with a Bachelor of Veterinary Science. Since graduating Bree has worked in a variety of veterinary disciplines to widen her medical and practical knowledge. In 2015 Bree achieved membership into the Australian and New Zealand College of Veterinary Scientists in the medicine and surgery of unusual pets. Bree has also undertaken numerous continuing education courses in exotic pet medicine to ensure her patients receive the most up to date treatment. In addition to exotic pet medicine, Bree has a keen interest in wildlife medicine having worked for a charity based wildlife clinic for several years before joining the AREPH team in 2014. 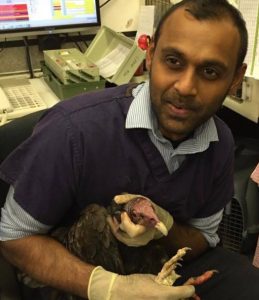 Originally from Mauritius, Dr Shivananden Sawmy has worked as a field biologist with some of the island's critically endangered wildlife, such as the Pink Pigeon and Echo Parakeet for several years prior to graduating from the Royal (Dick) School of Veterinary Studies, Edinburgh, UK in 2010. Shiva has worked in exotics, zoo, wildlife and small animal practices across the UK until he moved to the AREPH 2.5 years ago. Furthermore, he has also worked with a neuter clinic, primates and endangered reptile and bird species back in his native Mauritius.

Having a passion for exotic animals and wildlife work, he completed a year-long internship in Avian/Exotics Animal Surgery and Medicine under the mentorship of Neil Forbes, FRCVS, at Great Western Exotics, UK in 2013. More recently, he completed a postgraduate qualification in Zoological Medicine, RCVS Cert AVP (ZM) from the University of Edinburgh and the Royal Veterinary College, UK. Shiva has also conferred the Royal College of Veterinary Surgeons Advanced Practitioner status in Zoological Medicine.

He is currently enrolled on the Masters in Conservation Medicine at the University of Edinburgh. Shiva has published several articles relating to exotic species and also collaborated with eminent Australian and international veterinary experts on a textbook on Reptile Medicine and Surgery (Editor: Brendan Carmel). He enjoys treating wildlife and all pet species ranging from dogs and cats, rabbits, reptiles, raptors to fish. 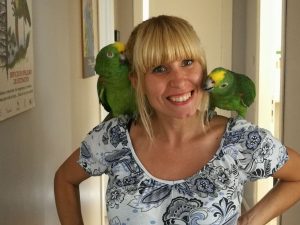 Petra Schnitzer graduated at the University of Vienna, with a thesis on the Evaluation of the physiological bacterial flora in Hermann´s tortoise.

After having received a training in birds and exotics at the University of Vienna, she underwent an externship in northern Italy (Clinica Veterinaria Valcurone), and in Brazil (Parque das Aves).

After her training, Petra has been staff veterinarian at the Loro Parque (Tenerife, Spain) the largest parrot collection in the world and then headed back to Northern Italy, where she almost exclusively worked with exotic animals in Italy, Spain and Austria.

Petra completed her residency for the European College of Zoological Medicine (Avian Specialty) and will soon sit the ECZM test.

Further, she is currently teaching for the General Practitioner Certificate in Exotic Animals for IMPROVE international in Spain and Chile and lecturing at post-graduate courses in Italy.

Her main interests are avian cardiology, ultrasound in exotic species and avian anesthesia. 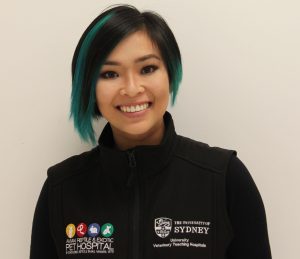 Dr Janet Truong graduated in 2012 with a Bachelor of Veterinary Science from the University of Sydney. Following graduation, she worked for three and a half years at a small animal and exotic hospital in Newcastle where she was able to build her knowledge and gain much experience with all creatures, feathered, furred, and scaled.  However, Sydney was calling, and she was fortunate enough to gain a 12 month internship with the amazing team here at the Avian, Reptile and Exotic Pet Hospital in 2016. When her 12 months was up, she was offered a continuing position as a clinician at the hospital, and it was an opportunity too good to refuse. She feels very fortunate to be afforded the opportunity to work with such a wide array of animals, both pets and wildlife, here at the Avian, Reptile and Exotic Pet hospital. 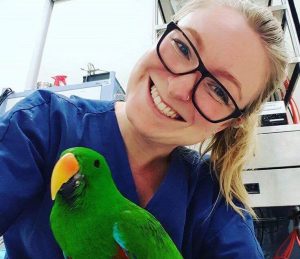 Hayley started vet nursing in 2009 working at an exotics clinic in Newcastle for five years moved to Sydney to work at a cat and dog clinic in Kirrawee. In October 2015, Hayley joined the team at AREPH and loves working with exotic animals again. Hayley finds each day to be different to the last and loves the new and exciting challenges At home Hayley lives with her partner, two dogs - a Kelpie and a Husky, a cat named Minchin and one very cheeky cockatoo
names Gonzo. 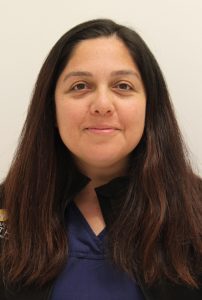 Sylvia is a fully qualified veterinary nurse with over 15 years experience in the industry.

She has worked at several veterinary practices and also at a referral specialist hospital before joining Sydney University in mid 2015.

Sylvia enjoys all aspects of her role at AREPH but has a soft spot for reptiles and wildlife. 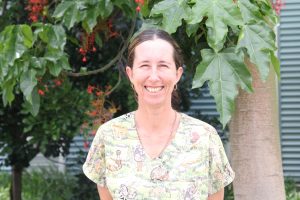 Rachel worked at Austral Vet Clinic for 12 years as a surgical nurse working with exotics, wildlife, cats and dogs. Rachel has a passion for horse riding and loves cattle and working dogs.