This little guy came to AREPH after it was discovered he was unable to fly when wildlife carers attempted to return it to the wild. A physical examination and radiographs done by the AREPH team revealed a fracture of the left ulna which was keeping the bird grounded. Fractures this close to a joint can be devastating injuries in wild birds as they are difficult to repair and can permanently affect their ability to fly if not healed properly.
Fortunately, under the skilled hands of Dr Petra, an intramedullary pin was able to be placed under anaesthesia to stabilize the bone and the wing was wrapped in a temporary sling to help immobilise the wing. The Tawny Frogmouth will be kept comfortable by wildlife carers until the bone is healed and the bird can safely fly on its own; until then, it will be treated with pain meds and undergo regular physical therapy to maintain range of motion in the wing.
Fun facts about Tawny Frogmouths
• Tawny Frogmouths mate for life and the male usually takes over egg incubation duty during the day
• The lifespan of a Tawny Frogmouth in the wild can be up to 14 years
• Their intricate plumage helps camouflage Tawny Frogmouths by disguising them as dead tree branches
• Tawny Frogmouths have stiff bristles around their beaks that are believed to help them detect movement of their prey
• The name “frogmouth” comes from the large, wide, gaping beak on these birds
Tawny Frogmouths are a nocturnal avian species so if you come across any out during the day, especially if they are on the ground, this is considered unusual, and you should contact your nearest wildlife rescue or the friendly staff at AREPH to get advice on how to safely help.
See the attached photos for pre-and post-surgical radiographs of the fracture.
Written by Ariel Lopez-Santillana - Final Year Veterinary Student, The University of Sydney. 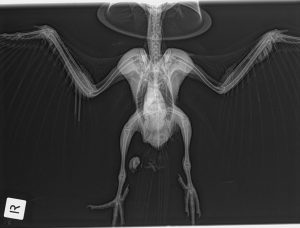